A sculpture is static. Heather Soderberg-Greene is not.
She’s on the “Lookout” for change after 20 years in making art from metal.
Four years ago, this sculptor came to the Gorge and quickly, and literally, made her mark in the community. 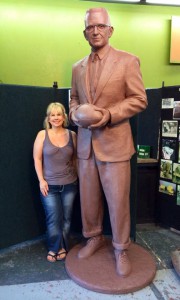 Well-known for her dramatic Sacagawea and Seaman statues at the Port of Cascade Locks, installed in 2011, Soderberg-Greene moved her foundry from Troutdale to Cascade Locks in 2010. Originally from Arizona, she worked in Hawaii and later in Portland before turning to art full time 20 years ago.

Soderberg-Greene’s WaNaPa Avenue foundry and gallery is a menagerie of bronze figures finished or on their way to completion via her patented wax casting technique. (It’s something best understood by reading her description on her web site, heathersoderberg.com).

The pelican figure “Lookout” is there, and with its looser lines and subtly interpreted anatomy, this new aviary work gives her pride. She views it as an artistic departure point. In essence, Soderberg-Greene is feeling a new freedom to move away from the photographic realism that has imbued her work since she started as an artist, a sensibility literally forged in the welding lessons she took with her father, John Soderberg, as a youth in Arizona …

About the Author: Heather

As one of the first women to own a bronze foundry in the United States, Heather Söderberg’s sculptures have earned her regional and world wide attention.